Facebook Twitter LinkedIn Tumblr Pinterest Reddit VKontakte Odnoklassniki Pocket
The UNHRC resolution today marked a failure in the UN (United Nations) system. A tiny genocidal regime, Sri Lanka, cleverly used geopolitics in order to escape or delay justice. After 12 years since thousands of Tamils killed and the Tamil Eelam government destroyed by genocidal Sri Lanka, UNHRC passed yet another resolution that still called for evidence collection. The resolution 30/1 in 2015 called for a hybrid judicial mechanism but the implementation of it was postponed 3 times for the last 6 years. In 2015, Nothern Provincial Council (NPC) unanimously passed a resolution called UN to act on Sri Lanka’s genocide against Tamils. Since 2015, the Tamil National Alliance (TNA) and Global Tamil Forum (GTF) jointly worked with Sri Lanka’s UNP on a regime change agenda with the USA. Instead of the focus on justice, these groups compromised it in favour of geopolitics hoping to push China out of Sri Lanka via a regime change.

The failure for delayed or denied justice for Tamils is not only with geopolitics but also by these Tamil groups as well. Tamil diaspora and human rights activists pushed hard since 2009 to get Sri Lanka’s war crimes and crimes against humanity and genocide charges in the UNHRC. From the Tamil diaspora, GTF and the TGTE (Transnational Government of Tamil Eelam) started to work after 2009. After genuinely working in 2010 and 2011, the GTF lost its credibility in 2012 when it became a tool for the USA and India. GTF’s financial account reported in the UK can clearly show that GTF doesn’t have any revenue reported after 2012. From 14 Tamil organizations’ diaspora organizations, it lost all its members in 2020. Similarly, since 2010, TNA lost half of its seats in 2020.  Congress party India lost and China strongly placed itself in India’s backyard in 2020. The result of undermining justice is clear, but still, no one seems to learn any lesson.


After the holocaust and WW2, the UN was created with big hope but its continuous failure to prevent genocides around the world will show its role will be less relevant in the future where China dominates the part of the world. Not only for the Tamil Nation in Eelam, any small nations around the world, but the UN system failure is also a clear sign that there will be no global support system that can protect small nations from larger powers.

Before 2009, the western and European world with Congress party India acted in favor of Sri Lanka by eliminating Tamil’s government in 2009. After several years, in 2015, it tried to make a regime change but Sri Lanka stayed with China. The UNHRC merely used for geopolitical reasons rather than justice. Even though there were hundreds of evidence of war crimes, crimes against humanity, and genocide, the UN members failed to deliver any form of justice so far. The current resolutions are also given the only option to Tamils to search for justice from possible other avenues including any possible partnership with China or the USA future. 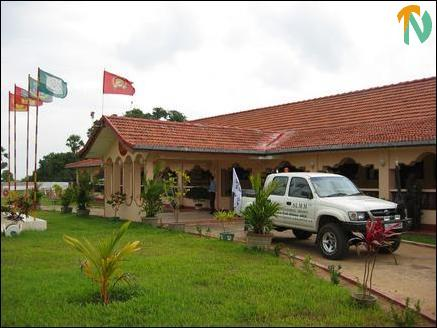 The above photo shows a part of the Tamil Eelam government that was in fact western friendly nation in all aspects. In 1987, India was against the USA. Even by then, Tamils were not against the USA. Still, the USA’s miscalculations eventually caused it completely lost its grip in South Asia. The following figure shows the nations that absent in the voting and India and Japan are among these undecided members accepting China’s dominance. 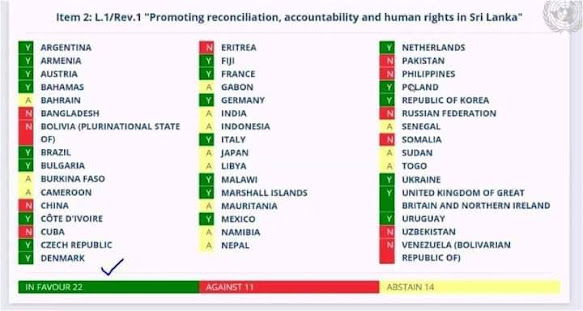 The resolution that passed today only has the following action in terms of justice.
“Recognizes the importance of preserving and analyzing evidence relating to violations and abuses of human rights and related crimes in Sri Lanka with a view to advancing accountability, and decides to strengthen in this regard the capacity of the Office of the High Commissioner to collect, consolidate, analyze and preserve information and evidence and to develop possible strategies for future accountability processes for gross violations of human rights or serious violations of international humanitarian law in Sri Lanka, to advocate for victims and survivors, and to support relevant judicial and other proceedings, including in Member States, with competent jurisdiction;”
Adopted UNHRC resolution in Sri Lanka2021

In 2021, as the UNHRC commissioner reported and all three Tamil parties jointly requested, the only way forward is to take tangible action to recognize Sri Lanka’s genocide against Tamils and refer Sri Lanka to ICC or an ad-hoc tribunal. Instead, UNHRC opts to choose further delay that will only allow Sri Lanka to escape from justice. Tamils now don’t have many choices as they did in 2015. Tamils are once again with the mercy of China or the USA. China will be the one that most likely dominates South Asia, therefore Tamils have to build a relationship with China sooner than later. The UNHRC also showed Tamils to seek justice from alternative jurisdictions possibility from members States.